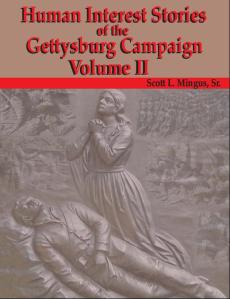 Reviewer: Jay Jorgensen
Jay Jorgensen is an attorney and municipal court judge in New Jersey. He is the author of Gettysburg’s Bloody Wheatfield and The Wheatfield at Gettysburg: A Walking Tour. He also received his Master’s Degree in Military History – Civil War Studies from American Military University.

The book is relatively short and contains only five chapters. Each chapter allows the author to provide stories/vignettes of different time frames of the battle.

The first chapter deals with the Confederate invasion into Pennsylvania. The next three chapters deal with each day of the three-day battle of Gettysburg. In the final chapter Mingus presents stories from the retreat of Robert E. Lee’s Army of Northern Virginia after the battle.

A casual perusal reveals hundreds upon hundreds of books and articles on the subject of the battle of Gettysburg. Many of them are detailed analysis of only one particular aspect or day of the battle. This book is a refreshing look at the human drama that unfolded over the entire Pennsylvania Campaign.

It is easy to read, for the author provides short vignettes often less than one page of text. In doing so he is able to pack 175 stories into the book.

The stories are true gems! Importantly, Mingus provides the reference for each story so that readers with a researcher’s bent can further explore the accounts cited.

Some of the marvelous nuggets readers will find are the identification of two battle participants whose great-grandson later became president of the United States. You’ll also read about men who fought at Gettysburg who were related to Revolutionary War personalities.

Human Interest Stores of the Gettysburg Campaign, Volume II is a well-written, well- researched and entertaining book that everyone will enjoy.