A few months ago, I wrote briefy about one of the largest Civil War dioramas in North America, a Canadian effort with 31,000 HO scale figures from Italari and Imex, with a few vintage Arifix figures mixed in for variety. The massive diorama was created by Alberta-based Stuart Le Crerar and the Medicine Hat Miniature Model Association (MHMMA), with figure alteration and customization done by Neil Olyott.

Stuart left a comment on this blog notifying the Charge! blog readership that he since has created new dioramas of the Alamo and Custer’s Last Stand at the Battle of Little Bighorn. His latest effort is the Charge of the Light Brigade, an assault made famous in the classic poem of Alfred, Lord Tennyson.

END_OF_DOCUMENT_TOKEN_TO_BE_REPLACED

25mm figures by Andy MacDonald-Rice, one of the most talented figure painters I have ever encountered.

My new skirmish-level Civil War miniature wargaming scenario book, Brothers Divided: Skirmishes in the Gettysburg Campaign, will make its debut at Little Wars 2009 this weekend in the greater Chicago area. Scale Creep Miniatures had planned to be actively selling the books in the convention’s dealer area, but the lousy weather here in southern Ohio (where I am on business this week) has prevented Mark Severin from making it up to Illinois. The Last Square may have copies for sale, or see Ivor Janci of Marek/Janci Design, who will have a sales sheet with ordering information. 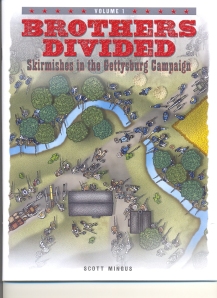 Internet orders will be taken later in February. For those gamers in the Gettysburg area, send me an e-mail and I will have some copies available myself, or you can pick them up at John Zabawa‘s fine store Gettysburg Miniature Soldiers on Steinwehr Avenue after Saturday. I plan to drop off a few copies to John then.

END_OF_DOCUMENT_TOKEN_TO_BE_REPLACED

Some of you have asked me to post a few more photos of my cavalry scenarios, so  here goes!

END_OF_DOCUMENT_TOKEN_TO_BE_REPLACED

The Johnny Reb Gaming Society publishes an all-cavalry scenario book entitled Crossed Sabers:  Cavalry on the Road to Gettysburg. It consists of more than a dozen scenarios for Johnny Reb 3 from the Gettysburg Campaign, including several from Brandy Station, as well as Upperville, Aldie, Middleburg, Gettysburg’s East Cavalry Field, the Battle of Hanover, etc. It’s only $15 postpaid right now for the next 2 weeks. Place your orders now! Send an e-mail to scottmingus@yahoo.com for ordering details.

Confederate cavalry under Fitzhugh Lee charges Union cavalry at the July 3, 1863, Battle of Gettysburg in what later became known as East Cavalry Field. Lee’s charge would be met by a counter-charge by Michigan troopers under newly appointed Brigadier General George Armstrong Custer.