Massive Johnny Reb III game to be held in Belgium 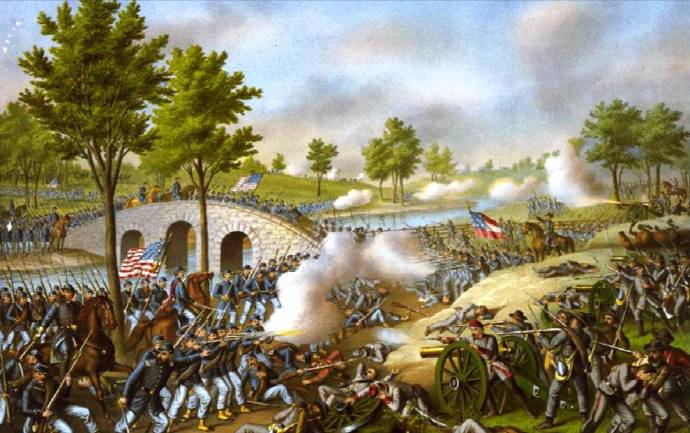 For those of you readers in Europe (or with enough funds and time to fly over from the states), the Tin Soldiers of Antwerp invites the public to its 2nd American Civil War weekend to be held May 30 through June 1, 2009. The club will host a massive Johnny Reb III event based upon the September 1862 Battle of Antietam (a.k.a. Sharpsburg – the subject of my Undying Courage: Antietam in Miniature wargaming scenario book). The gaming will last for almost three full days (details will be provided upon registration). The gaming layout will be a whopping 18 feet by 12 feet, using 28mm figures and accessories.

The best news??? The price of admission and playing in what promises to be Europe’s largest JR3 event is nothing. That’s right – free! Simply get to the Tin Soldiers of Antwerp’s clubhouse in Belgium, knock on the door, smile, and warm up your dice.

For information or directions, contact Andre van Gils of the club at andre.van.gils@telenet.be

I’m jealous! I’d love to see this layout in person, but I will settle for photos I am asking Patrick Roovers to share with us after the game. 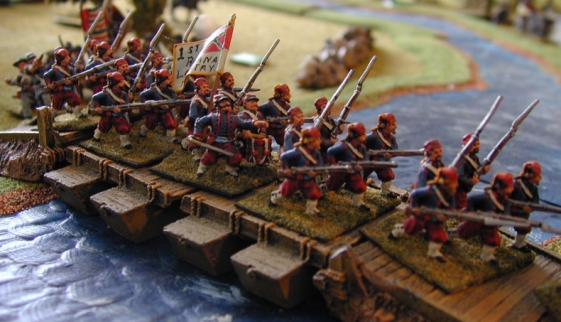 The 1st Louisiana Zouaves cross a contested bridge near the Pennsylvania-Delaware border following Robert E. Lee’s smashing victory at the Battle of Gettysburg and Meade’s subsequent retreat. Note the excellent details on these figures!

Bill Witthans is a Southern California wargamer and miniature figure painter who also is a talented photographer.  He and his friends in the Bengal Club LA have been playing American Civil War games using Fire & Fury and Johnny Reb 2, as well as other wargaming rules and periods. He recently found this CHARGE! website from the Johnny Reb Gaming Society and subsequently sent me an e-mail to introduce himself. He  sent me a link to his interesting website, which is chockful of photographs of miniatures he has painted, as well as several wargames in progress. 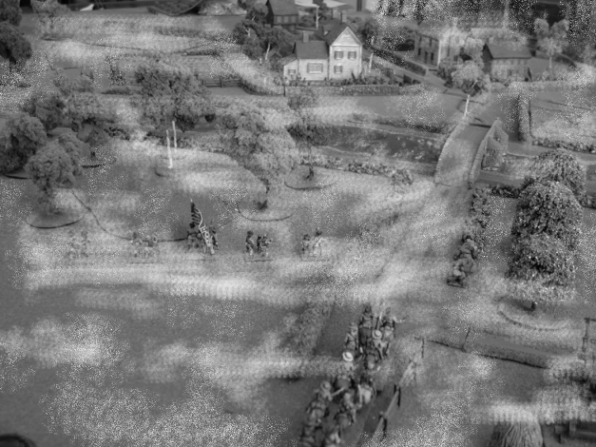 An interesting photo technique; this picture was apparently taken by a miniature combat photographer perched on the mountaintop behind the lines. Bill’s site has several such black-and-white “period” photos in the spirit of Matthew Brady. 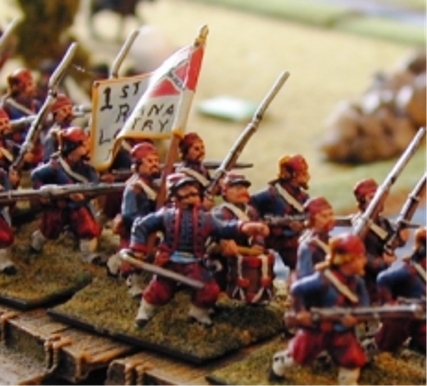 I don’t know if Bill knew I have written a new book on the “Louisiana Tigers” of Harry Hays’ First Louisiana Brigade, but here is a close-up of his 1st Louisiana Infantry from Colonel Jesse M. Williams’ Second Louisiana Brigade. By the time of the Gettysburg Campaign, the Army of Northern Virginia had no zouave units, but the miniatures make a VERY colorful addition to the gaming table! The original “Wheat’s Tigers” have long been a popular topic for books, paintings, model soldiers, and miniature wargaming.

Sweeping vista opened up from Little Round Top at Gettysburg 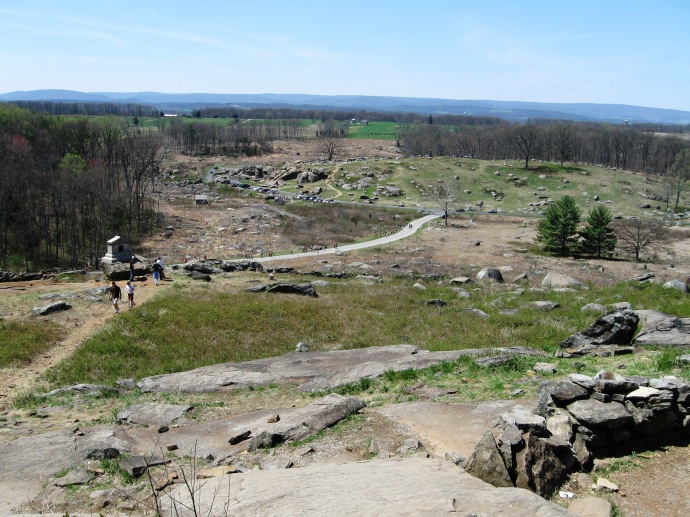 The recent clear cutting of the non-historic woods that have overgrown the southern part of the Gettysburg battlefield has resulted in a much more open appearance. The view from Little Round Top looking southwesterly toward Devil’s Den and beyond to Warfield Ridge is now quite striking, and one can get a little better sense of the terrain beyond the rocky Plum Run Valley area. On this gorgeous Saturday in mid-April, the tourists were out in droves, as well as hundreds of boy scouts from a wide variety of states.

The National Park Service is to be commended for its long-term focus on restoring historic site lines at Gettysburg National Military Park, and the tree-cutting is still is progress (most recently near the McAllister farm). 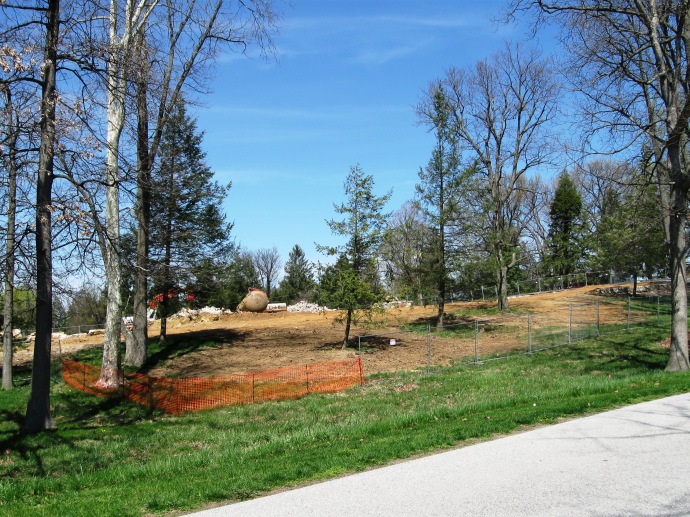 The old Gettysburg Visitors Center / Rosensteel Museum is now gone, having been demolished over the past 2 weeks. Here are a couple of photographs taken today while I was in town for the annual History Meets the Arts festival. 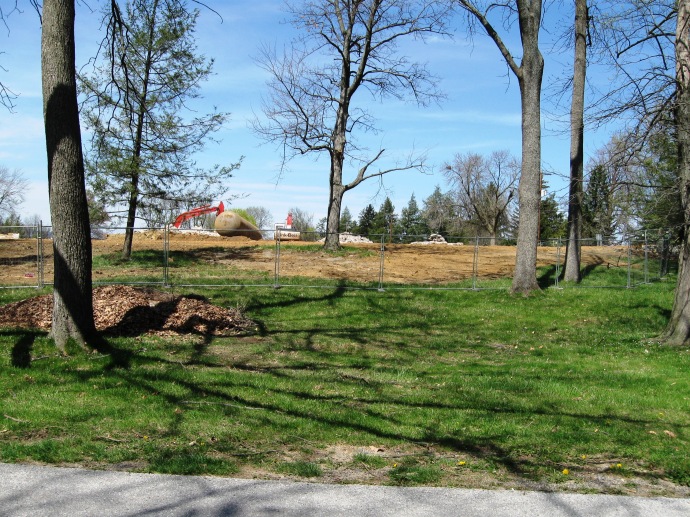 The destruction of the decrepit Cyclorama building has unfortunately been delayed because of a lawsuit and a ruling that prohibits the park service from ripping down the old eyesore until preservation efforts can be mounted.

Do you use order dials for Johnny Reb 3 or chits? 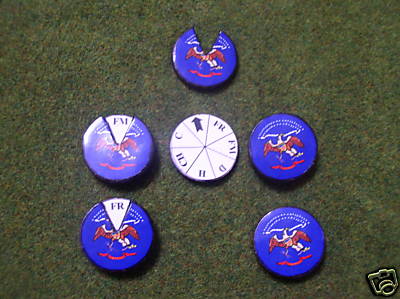 One of the most critical parts of the Johnny Reb gaming mechanism is marking orders for individual regiments (or collectively for a brigade). A number of different methods have been used. In the very early days, some gamers made foam cubes, marked on each side with one of the six key orders (Form, Move, First Fire, Charge, Conditional Hold, Hold, and Disengage). The desired order was face up, covered with a piece of paper or a chipboard chit. Later on, GDW included pre-printed order chits, with one order per chit, and these were distributed in the game boxes; additional chits could be ordered or bought at participating gaming retailers. Some people flocked the backside of the chits to make them look better on the gaming table and help them blend in for photography.

A couple of years ago, a Midwestern gamer began creating and selling Fox’s Bases – magnetic disks marked with the six JR orders, with another magnetic cover to mask the order. These were flocked. They were initially popular, but because of health issues, Rob had to curtail his activities.

Now, the Dial Dude has decided to adopt Fox’s Bases concept and further improve it with covers that have flags for easy ID. A full report will be in the August issue of the hard copy CHARGE!, as well as ordering information and, if all goes well, free samples.

Do you use Fox’s Bases, chits, cubes, the new improved disks from the Dial Dude, scraps of paper, or some other method to mark your orders?? Any photos of your games with markers that you want to share? 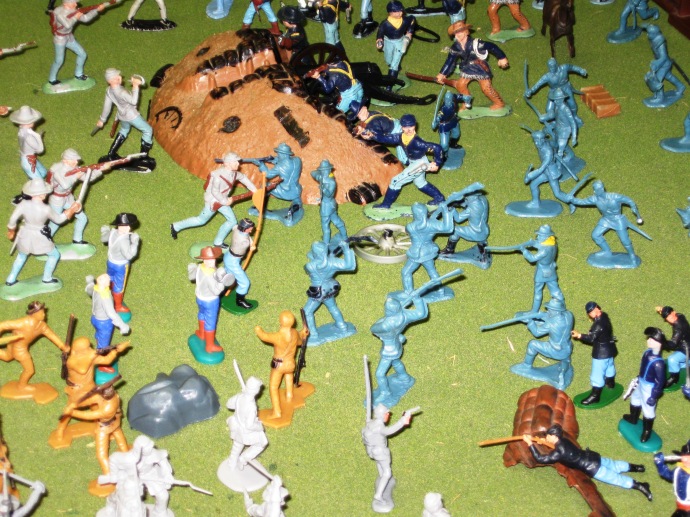 This photo shows a hodge-podge of different 1960s toy soldiers. The redoubt is from my Marx Civil War playset (the 1963 Centenniel Blue & Gray playset). The figures manning the guns I bought at S.S. Kresge in Zanesville, OH about 1966-68, and I am told they are Crescent figures from England. The soldier blue figures to the right center are Marx 54mm cavalry figures from the Fort Apache playset. The figures at the bottom right are Britains, some of which came from Gettysburg’s Fort Defiance gift shop in 1968. The brownish figures are Marx 54mm figures from their Boonesborough playset, including Daniel Boone. Some of the gray figures at the lower left are more recent figures and were from my kids’ childhood in the 1990s. 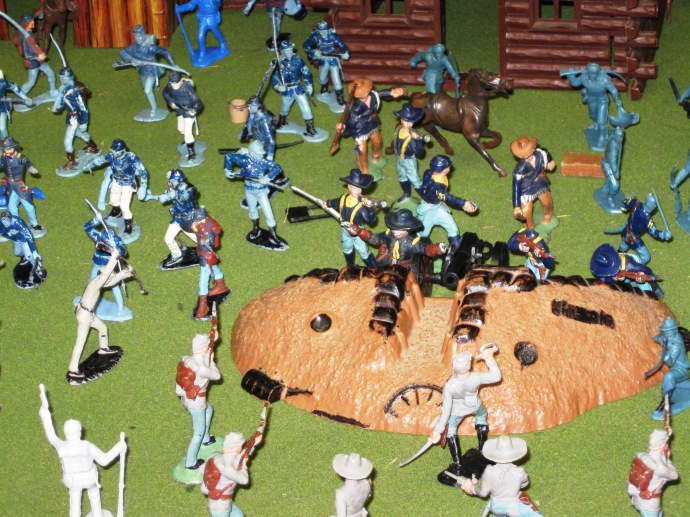 Another view of the Marx redoubt and the unknown figures… the ones to the upper left of course are vintage Marx Centennial figures.

END_OF_DOCUMENT_TOKEN_TO_BE_REPLACED

The 1862 Battle of Scottsburg 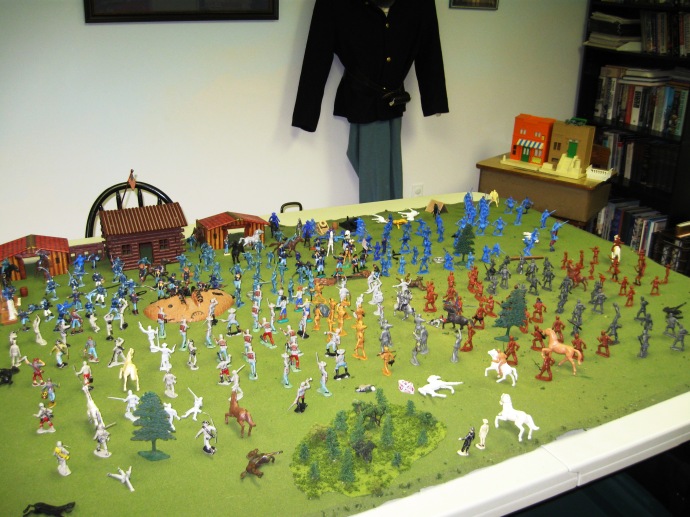 In the spring of 1862, Confederate Maj. Gen. Zachary Thomas led his veteran division on a mission to raid Federal supply depots and to disrupt enemy communications and logistics. He also hoped to draw the Federals’ attention away from the main lines, and, in doing so, open the way for the Confederates to retake most of Kentucky. One of his objectives was the sprawling Union supply depot near Scottsburg, where he hoped the local civilians would rise up and join the Confederate cause.

Defending the depot was the relatively untested Union garrison under Brig. Gen. Michael Lynn. It was a hodgepodge force, made up of various companies recruited throughout eastern Kentucky, including the Marx Guard, the MPC Rifles, the Britains Scouts, The Tim-Mee Warriors, and the Ideal Company. Lynn had a field gun, and a pair of old mortars at his disposal, but ammunition was scarce, and the nearest trained crews were at Fort Rebecca forty miles away in Ashland. 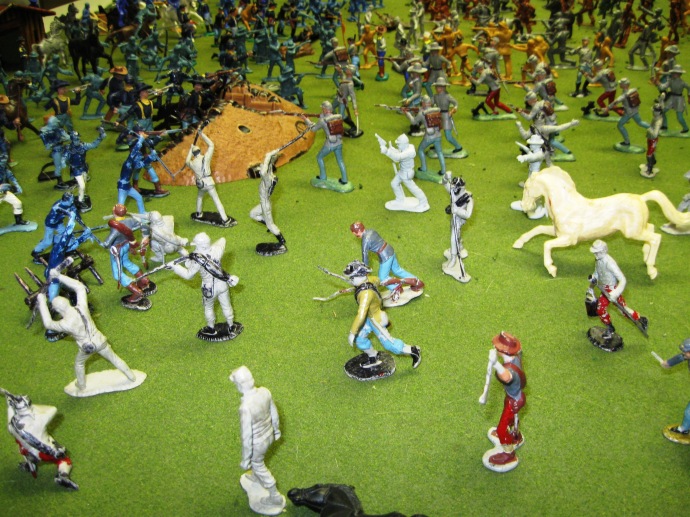 Colonel Leroy Marks led the Confederate troops on the left, where they slammed into the Federal Marx Guard. A wild melee soon ensued, and the Rebels entered the outskirts of the depot.

END_OF_DOCUMENT_TOKEN_TO_BE_REPLACED 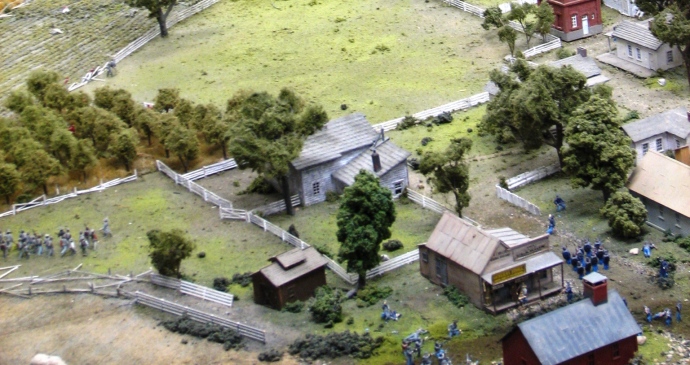 This week, Gettysburg National Military Park is replanting four more historic orchards in major battle action areas on the battlefield. Contractors for the National Park Service will replant 30 acres of orchards with hardy varieties of apple so visitors can better understand the fighting and see the battlefield through the eyes of the soldiers fighting in 1863.

The project includes replanting the largest orchard in the park – the McMillan Orchard which is 26 acres along both sides of West Confederate Avenue. In addition, the park is replanting the orchards at the Timbers Farm, Klingel farm and at the Spangler farm at East Cavalry Battlefield. The contractor is Hively and the trees are six varieties of hardy apple.

According to park historians, almost every farm of any size in 1863 Gettysburg had an orchard, usually of a size in proportion to the farmstead. The orchards played many roles during the battle–cover from observation or from fire for both troops and artillery batteries; concealment during movement; obstructions to observation or clear fields of fire; places to gather to rest or seek medical assistance.

Since 2000, the park has replanted 79 acres at 32 historic orchard sites. The goal is to replant a total of 160 acres of orchards throughout the major battle action areas of the battlefield. For more information go to www.nps.gov/gett

New music to paint figures by??

I am pleased to announce the release of my new CD – Voices Hushed and Still…a collection of Southern Songs and Rare Gems from the Civil War Period.

I was born and raised in Harrisonburg in the heart of the Shenandoah Valley of Virginia and now reside outside of Nashville , TN.

I am a member of the UDC Kate Litton Hickman Chapter in Nashville and am a chairman for The Music of the Confederacy for the state of Tennessee .

CD layout was shot at the McGavock Confederate Cemetery in Franklin, TN.

* Richmond is a Hard Road to Travel

* Cruel War/Johnny Has Gone for a Soldier

* When Upon the Field of Glory

You can hear samples of the songs, download and/or purchase at: http://cdbaby.com/cd/lisameyer

The CD can also be purchased directly from me for $14.00 – includes shipping and handling (check or money order made out to me).

Coming in the May issue of CHARGE!

Debi and I present three original scenarios for the regimental-level miniature wargamer, including two Trans-Mississippi games that will require Native American troops. These are the First Battle of Newtonia (by Jerry Stefek) and the Battle of Honey Springs (Scott Mingus). Also, Jim Kopchak gives us a scenario for the 1865 Battle of Averasboro during the end of the Carolinas Campaign.

Other articles include a treatise on hidden movement by Larry Reber (useful for the Averasboro scenario!), as well as John Mayer of Round Top Miniatures detailed step-by-step guide to making interesting flexible forests and woodlands. I also include some fresh anecdotes from the Gettysburg Campaign.

CHARGE! will be mailed the first week of May, on time for the 23rd consecutive issue, something that Debi and I are quite proud of, considering we have real jobs and do this as favor for the JR gaming community as a non-profit contribution.

Coming in the August issue are a look at Dennis Morris’s basement spectacular Gettysburg diorama and how to make similarly detailed terrain of your own, Larry Reber’s look at supply wagons and support vehicles to fill out your gaming article, Jerry Stefek’s tour of a great new Civil War museum in Wisconsin, a review and pictures of John Hill’s appearance at Kubla Con, and a few scenarios of interest to regimental ACW gamers!

We are always looking for new articles and scenarios, so keep sending them in, please! We want CHARGE! to add value to the gaming community, and it’s only as good as the contributions you send in!