Many of you know that I consider my good friend Larry Reber of West Virginia to  be the finest 15mm Civil War figure painter and innovator in the hobby today. His figures and accessories are intermixed in my collection with my own, and frankly, he does outstanding work. For some time Larry, a long-time Johnny Reb player,  has been developing his own set of easy-to-learn, easy-to-play rules. He playtested them extensively at various venues, including the Advance the Colors gaming convention in Ohio last year and they received high marks. Larry has polished his Gettysburg Soldiers American Civil War Miniature Rules and had them printed on very high quality coated card stock.

Filled with many color photos of Larry’s magnificent figures, the book itself is attractive, sturdy, and well organized and easy to read and comprehend.  Its spiral binding enables the gamer to locate key charts readily and it lays flat on the gaming table. Mr. Reber, whose website is  www.gettysburgsoldiers.com, has hit a home run with his new rules. They are exactly as advertised — fun, imminently playable, and perfect for small gatherings of gamers who want to have an enjoyable time without massive amounts of die rolls and always needing to consult tables with dozens of die roll modifiers.

The regimental-level rules use a ground scale of 1 inch to 25 yards and a figure scale of 1 stand represents 50 combatants. Larry has told me the typical game lasts 3-4 hours, depending upon the scenario and number of players. Games can be even shorter if the players are experienced.

The gaming mechanics are straight forward — MANEUVER, FIRE, MELEE. At the beginning of each game turn, players roll 1D6; high sum decides if they want to move first or pass to their opponent, and then counter-move. The phasing player does his movement, and then his opponent maneuvers his troops in response. Players then dice down to see who gets the choice of shooting first. Finally any melees are resolved. Simple, quick, and easy. No fuss; no muss. All casualties are taken off immediately; there is no simultaneous movement or combat, unlike JR3 and some other rules systems.

Step 2 = Side A maneuvers his troops

Step 3 = Side B responds 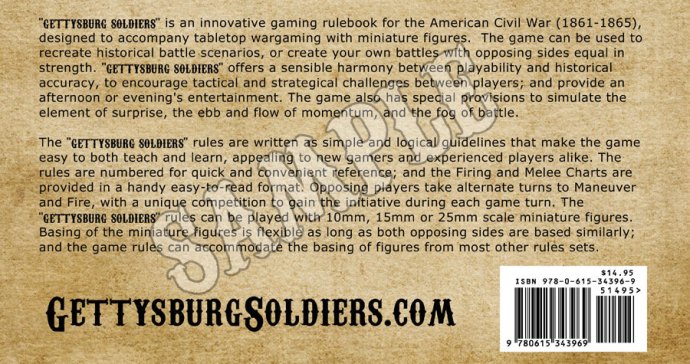 These new rules are sure to become popular and they stand out in a VERY crowded field of available Civil War rules sets for one simple reason — they are so easy to learn and have little in the way of complications. As such, they would be perfect for the casual Civil War gamer, or for introducing new players such as teenagers and middle-schoolers to the hobby of miniature wargaming.

Larry sells copies through his website; the price is $14.95 or two copies for $20. Pick up a copy or two today and try them out!