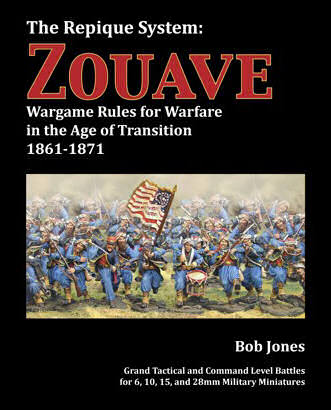 Veteran gamemaster and rules maestro Bob Jones has long been a mainstay in the hobby of miniature wargaming. His Piquet rules set has been a popular favorite for many years at major conventions around the country, as have many of his other published rules systems. Bob has a major following on the Yahoo Group for his rules. In May 2010, his long awaited Civil War-era rules set,  Repique: Zouave – Wargame Rules for Warfare in the Age of Transition 1861-1871, was released to the public and is now available through leading retailers. It’s a fine piece of work and well worth trying out at your next gaming session. Zouave is the first in a new rule series using the new Repique System.

While Repique: Zouave focuses on the American Civil War combat tactics, it is very usable for other conflicts in that time frame, including the Fenian Wars, the fighting in Mexico against Meximilian, the Franco-Prussia Wars, and other lesser k known engagements.  Bob’s goal was to design an easy-to-play, fun, and fast rules set that covered larger units such as divisions and armies. While based loosely on the Piquet system, Repique: Zouave has its own unique mechanisms and resulting strategies. Bib has more than succeeded in his quest to give the gamer a solid feeling for the command and control nuances of a Civil War army, as well as large unit combat, without getting too bogged down in tactics and endless charts and tables. Zouave is a well-written, interesting rules system which promises to become very popular at major conventions in the years to come once gamemasters become familiar with the new product.

The system is fairly straight forward. The GM controls the initiation and sequencing of troops through a standard deck of playing cards. Nothing special is needed to play a game of Repique: Zouave — multi-sided dice, paper-punched markers, pennies for order markers, cotton balls for smoke, and other common inexpensive items. The rules are straight forward, and are presented in a unique FAQ format that makes it easy for the novice gamer to easily find answers to the most common questions they would encounter in a typical gaming session. Players may use use 6, 10, 15, 20mm and 28mm. figures with Zouave. Only four SIMPLE tables are used in playing the game!

The game has a strategic element in that the players must prepare their divisions for combat by making sure they obtain enough “command pips,” which are tracked through the use of pennies. Movement, command and control, and other key factors are influenced by these pips, some of which are scenario-specific. The commander may augment the pips through a one-time pre-battle die roll. Within the division, individual subunits such as brigades and regiments may operate independently through the expenditure of command pips or tactical action pips. The combat procedure and the D12 regimental move tables are innovative and quite unlike the typical rules system. Zouave is best with 2-3 players a side, but can be used for solo to 4 players per side with slight adjustments.

Standard playing card decks are used, and up to five cards removed to reflect the quality of the army (more cards taken out for poorer quality troops). Both armies use the same deck, but one side use the red cards and the other the black ones. A random card drawn each turn will determine which army will take actions or issue commands, and how many of each may be undertaken.

After the deck is set up, the commanders rate their units for quality and effectiveness of weaponry using a chart known as an Army Quality Record, a simple roster that includes officer ratings. The decks of cards are shuffled (with jokers included). Diamonds are the command suit for the red army with hearts being the action determining factor. Similarly, spades and clubs, respectively, determine the command and action for the black army. Command includes morale, movement of individual units, morale tests, and divisional moves, while actions include tactical movement of regiments and the reestablishment of fire discipline.

Units may fire at any time, even while the opponent is moving. Player aid cards delineate movement factors, fire and combat results, and melee results.  Secret die rolls that are kept hidden from all players are used when jokers are drawn as part of major morale checks. If a non-joker is drawn (two cards are drawn initially each turn), then specific rules are followed to determine activation. It may sound complex in this brief review summary, but it’s easy to catch on to, especially with the plenteous examples in the rules book.

Bob Jones, as usual, has extensive on-line support collateral, including an on-line forum and discussion group, available at the Repique website.

Give them a try!

Zouave is a 8 1/2 x 11″ saddle-stitch bound rule book with color covers and black and white contents. Many photos and illustrative graphics, and frequent examples of key points in the rules are provided. Four, two-sided, player aid cards in heavy card stock. Only $29.95, plus shipping, if ordered from Bob.