The Harford Area Weekly Kriegspielers (HAWKS) club put on its annual Barrage wargaming convention today in Baltimore, Maryland. This is the fifteenth edition of this popular regional mini-con. Click here to visit Buck Surdu’s website for the con.

Attendance was strong, with several interesting dealers present with all sorts of fun merchandise. The games appeared fairly full, and all seemed to be having a good time. Good mix of younger gamers, females, and we 50ish middle-aged geezers.

Here are some more photos of today’s action. 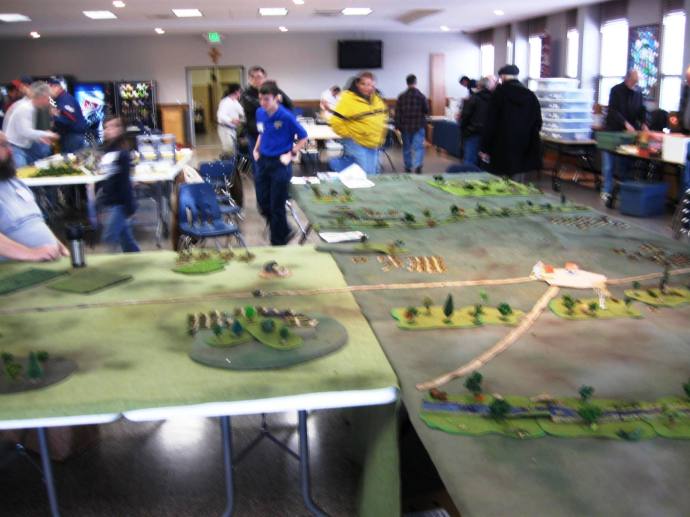 Overview of the convention floor about 9:00 a.m. in the morning. The convention was held at Archbishop Curley High School on the far east side of Baltimore, with easy access to I-83, IO-95, and I-695. Gamers primarily came from Maryland, Pennsylvania, and Virginia in scanning the license plates in the parking lot.

I always enjoy looking at 25/28mm set-ups, although all of my gaming figures are 15mm. These buildings sure looked nice in person.

The Civil War battle of Stones River / Murfreesboro in 10mm. This was a battle  fought in the winter; hence the lack of color on the terrain. Rules – A Union So Tested. “December 31, 1862. Come refight the Battle of Stone’s River (also known as Murfreesboro). Will the Rebel surprise attack be enough to sweep the Yanks all the way back to Nashville or will Generals Thomas and Sheridan once again hold and become the most famous commanders to come out of this battle.”

Archduke John’s Last Stand: Raab 14 June 1809: “After retreating from Italy, John arrived at Raab to be reinforced by 10,000 Landwehr of the Hungarian Insurrection. Although about half of his army was now Landwehr, he was finally almost equal to Eugene in strength and so he decided to fight.Even though Archduke Charles ordered him to split his forces to engage in a campaign of delay and harrassment against Eugene’s advance, John disobeyed his orders to fight one last battle.After all, this time he had the benefit of good terrain. If John could defeat Eugene here, Napoleon would be deprived of The Army of Italy’s five divisions for the Battle of Wagram perhaps giving Charles the win. The fate of Europe could be decided by what happens here at Raab.” 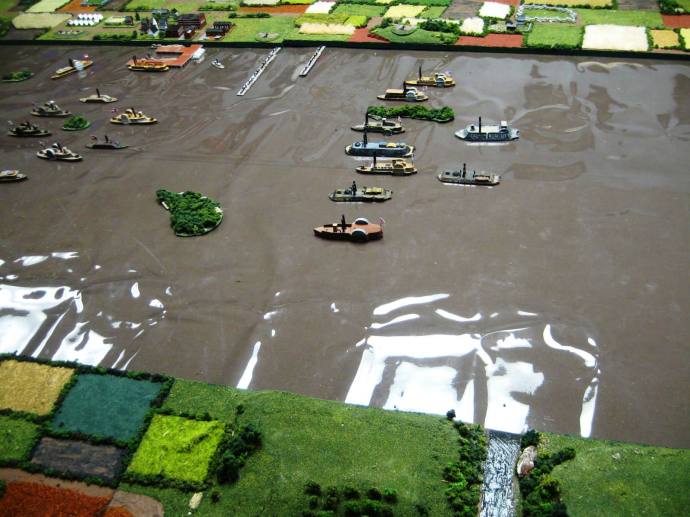 Mississippi River action using the new River Wars gaming rules set from the Johnny Reb Gaming Society’s Bob Johnson. The Southerners managed to eke out a narrow victory over the attacking Union gunboats and Ellet Rams. The rules will shortly be available on the Wargame Vault’s website (www.wargamevault.com)

The “Airboats, Alligators, and Demon Rum” game set in the Florida Everglades was a unique and interesting game concept.  “A foreign freighter has just dropped off a load of liquor amongst the 10,000 Islands of southern Florida. Now rival gangs race through the alligator-infested mangrove swamps and over the Everglades grasslands in their high speed airboats to be the first to pick up and deliver the alcoholic supplies to the thirsty folks of Miami. But wait – the plans were not as secret as had been hoped, and is that the Coast Guard steaming in to thwart the bootleggers?”

By 12:30 p.m. the convention hall was overflowing with gamers and shoppers. A very nice turnout, indeed! The HAWKS are to be commended for another job very well done.

Another view of these terrific buildings!