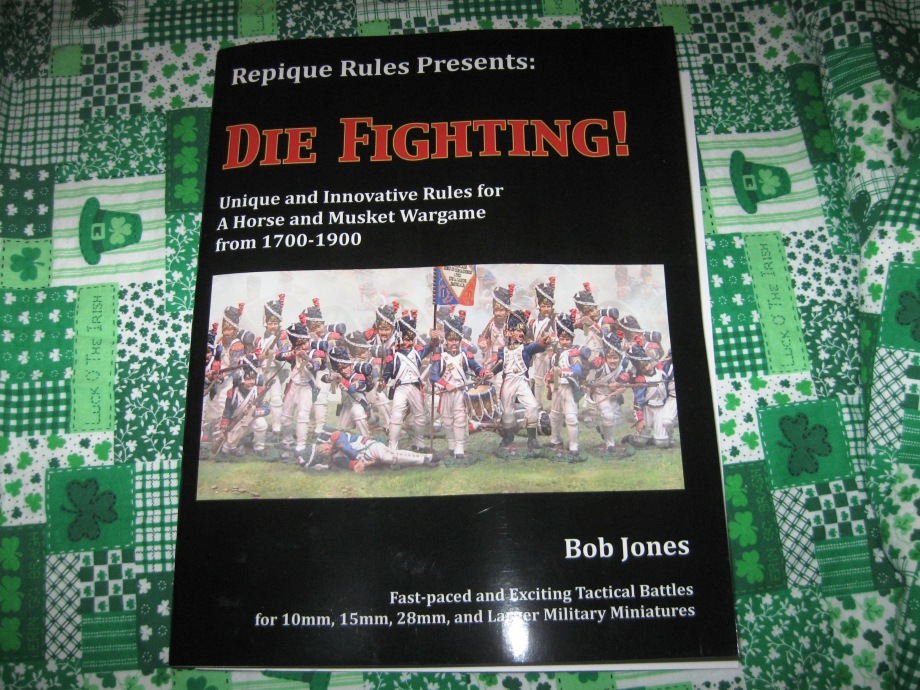 Long-time wargamer and rules author Bob Jones of Repique Rules is back with a brand new rules set that is sure to excite gamers who like the horse & musket period (roughly 1700-1900). This of course includes the popular wargaming topics such as Napoleonics, the American Civil War, Mexican War, Crimean War, American Revolution, Hundred Years War, French & Indian War, the Franco-Prussian War, Spanish-American War, and what Bob terms the Linear Wars (for example, the Age of Marlborough and the Age of Reason). Refighting the battles of Frederick the Great, Wellington, George Washington, Santa Anna, Stonewall Jackson, Teddy Roosevelt, and von Moltke with a single set of rules is a major hallmark of Die Fighting! Each time period has a few unique and simple rules that help add flavor and playability to that particular war.

The new easy-to-learn rules are designed for 2 players to small groups, and can be used at home or at conventions. It lends itself to tournament play, campaign play (with statistics), and.or single battles. Solo play is also covered in the rules and should be useful for those times when potential opponents cannot be found as they fear your die-rolling ability. Nothing unusual is required to play Die Fighting! – standard D6 dice, tape measures/rulers, and terrain / figs are all you needs, plus the rules books, simple charts, and events cards. 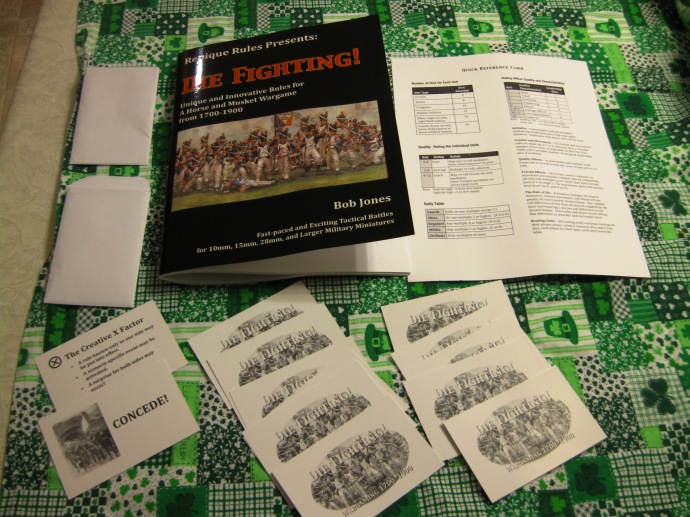 The rules book is 54 pages (black and white), with charts and cards as shown above. The graphics are minimal but effective, and the layout of the book is clean and crisp. The rules are well organized and easy to follow, and appear to be well thought out as well as entertaining (typical of Bob’s previous efforts). They are not indexed, but the Table of Contents is clear enough to help the gamer find what he/she is seeking. A small bibliography is included at the end with some useful resources for further independent study.

The book begins with an explanation of the core content, as Bob explains the fundamental game design and theory. Each player begins with a number of red dice called resource dice. The number and type of units in a player’s army determines the total number of resource dice at the beginning of a Die Fighting! session.  These resource points are spent during the game to facilitate key actions such as movement, firing, melees, and rallying. The resource dies diminish as the game is played until one side exhausts his supply. At that stage, the game ends and the side with dice remaining is the winner. Sounds simple enough! No ambiguity as to who won the day’s events!

The Table of Contents begins with Turns, Phases, and Time, followed by a discussion of Unit Representation and Basing requirements (straight forward — any conventional basing can be used as long as both sides are consistent!!!) Therefore no rebasing of existing armies is needed! The rules will work well for 10mm up to 54mm, and are highly flexible and adaptable to the warfare time period.  Each regiment or battalion typically consists of four stands with four figures each.  This is the basic unit for firing, movement, etc. for the game mechanics. Artillery is based with one gun model per stand, representing a single battery (adjacent batteries may be combined into a grand battery).

Command and control is the next section of the book. Each army should have a leader figure for every two to five units, as well as an overall commander-in-chief.  The number of subordinate officers is determined by the time period and army quality (less subordinates indicates a poorly led force). A divisor number is used to determine the number of officers (for example, if an army has 12 units and it has a divisor or 2, it will get 6 officers (the commander and five subordinates). If the divisor for that army is 4, it will only get 3 officers and will be more limited in quality and responsiveness. The divisor numbers also determine the number of cards the army will lay down at the beginning of a turn. These numbers are determined by the army period template or can be scenario specific. Officers also have individual ratings from Inept to Superior.

Movement is determined by rolling one or two resource dice, using 1″ of movement per pip rolled (movement may be less than but never greater than the dice roll tally).  Any doubles rolled may be ignored and rerolled if the gamer so chooses. Any unit within 9 inches of an opponent may choose to charge the position and melee the defender.  Terrain, of course, affects movement and charges.

Combat is rather unique and involves both players rolling a number of dice, with the high total winning. Leaders, weaponry, range, morale, terrain, and other factors determine the number of dice thrown. If the pip tally differential is less than six, the loser has the option of retreating in disorder or discarding resource dice and standing his ground. If he loses by more than six, he must retreat and lose dice. Disordered units may attempt to rally during the Rally, Restore, and Reload phase. Troop quality plays a significant role in success.

There are specialized actions in Die Fighting! including engineers / sappers, which can function as infantry; build bridges and barricades; repair damaged roads, bridges, and walls;  prepare buildings for defense; place and detonate charges; create entrenchments; and in later periods establish telegraph and/or semaphore communications. Resource dice are rolled to facilitate these actions.

I commend Bob Jones for designing these very flexible and simple-to-learn rules. Die Fighting! is a highly flexible gaming system that is easily adaptable to a myriad of wars using period-specific templates included in the rules book. They certainly are “unique and innovative,” as the book’s subtitle purports. “Fast paced and exciting tactical battles” — indeed!

Stock up on red dice!