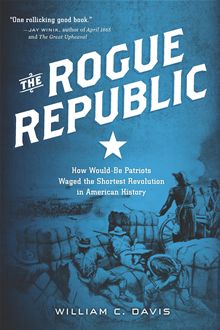 I have long admired the writing of award-winning historian William C. Davis, and have several of his books in my collection. His style is crisp and clean, easy to read, and his narratives flow well and are entertaining as well as educational. He has appeared on countless TV programs as an expert, lectured widely, and edited magazines and historical articles, as well as writing more than forty books on a wide range of historical topics, including the American Civil War.

Davis’s latest effort, The Rogue Republic: How Would Be Patriots Waged the Shortest Revolution in American History, is a tightly woven, well crafted book that neatly tells the story of one of America’s early civil wars — the 1810 rebellion of West Florida (which comprised much of today’s Florida, Mississippi, Alabama, and Louisiana). Those areas would secede from the Union in 1860, but fifty years earlier, the forefathers of the Confederates also staged their own rebellion. Now largely forgotten by the general public, William C. Davis has brought life to this rather obscure story, one that pre-staged the Civil War and shaped attitudes and anti-government emotions, and paved the way for self-rule sentiments.

The promotional material from the publisher, Houghton Mifflin Harcourt, states, “With an eye for eccentric characters and minute details, Davis tells the story of how the four parishes north of New Orleans between the Mississippi and Pearl Rivers captured Baton Rouge, inaugurated their own government, and launched a military campaign to take Mobile and the rest of Spanish West Florida from Spain during their seventy-one days of independence.”

END_OF_DOCUMENT_TOKEN_TO_BE_REPLACED 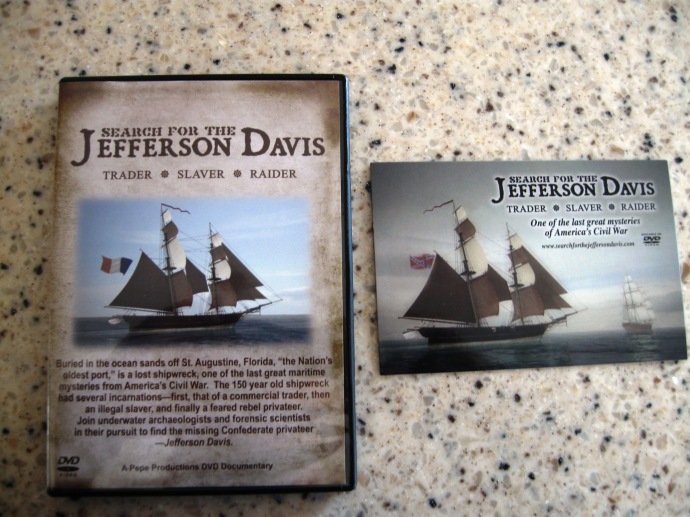 The Confederate privateer Jefferson Davis is now little remembered within the Civil War community, but in the war’s first year, 150 years ago, it was one of the most feared raiders. Preying on Union cargo ships and supply vessels, the Jefferson Davis enjoyed one of the most successful raiding expeditions of any Rebel ship, seizing nine prizes in one outing.

Pepe Productions sent me a copy of their fascinating DVD about the history of this ship, which ran aground  at St. Augustine Inlet in Florida on august 17, 1861, and was abandoned to the elements. Over time, the shipwreck was lost. The St. Augustine Lighthouse & Museum sponsored a search for the Jefferson Davis, and a crew of divers and marine archaeologists discovered the decaying remains. Their 2010 DVD,  “Search for the Jefferson Davis: Trader * Slaver * Raider” chronicles that search.

The story itself is interesting to any Civil War buff, particularly those who may be naval wargamers or naval history fans. The DVD is well done, with a good storyline and great underwater photography of the shipwreck, despite the poor visibility often associated with St. Augustine’s waters.

To view the trailer for this film, visit Pepe Productions’ website and have a look.