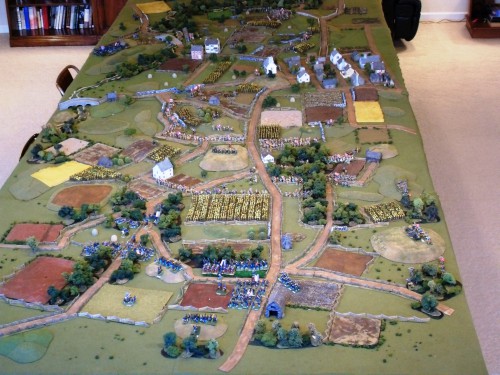 Years ago I wrote the text for a very popular wargaming scenario book, Undying Courage: Antietam in Miniature, which has unfortunately been long out of print. Long-time Johnny Reb wargamer Jerry Merrell has taken several of my scenario maps (drawn by graphic artist/publisher Ivor Janci of Wheaton, Illinois) and combined them into one large tabletop layout of Antietam for a heavily modified version of the late John Hill’s Across a Deadly Field rules. Check out his layout above! Impressive!

Jerry writes, “I photocopied the maps from each Antietam scenario & pieced them together (resizing where necessary) to create the mosaic shown. A few compromises were made, but not many & none where significant fighting was anticipated. We’ll be using traditional 4 stand JRIII regiments with simplified ADF rules. 15 players
with a total of about 600 stands. Hope you enjoy seeing that you work endures.”

Here are a few photographs Jerry sent to me…

Jerry photocopied the maps from my booklet, put them together as shown above, filled in the blank spaces, and created the really nice tabletop battlefield shown in the first photo. 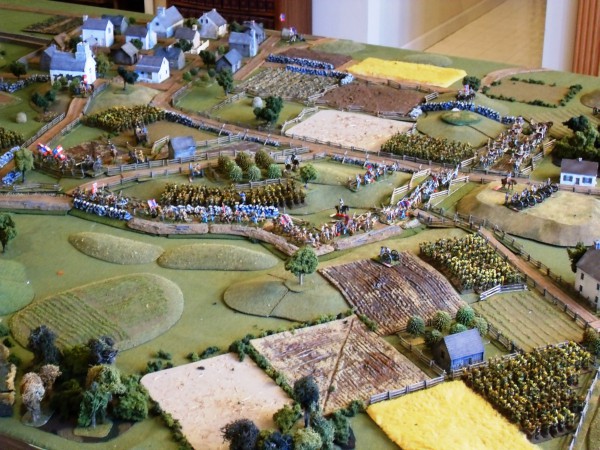 What a good-looking tabletop! Well done, Jerry. The corn squares appear to be from Battlefield Terrain Concepts (Doug Kline). A couple of the fields are from Miniature World Maker, I presume.