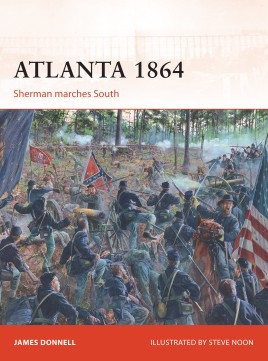 From Osprey’s website: “On September 3, 1864, Union Major-General William Tecumseh Sherman telegraphed the War Department in Washington, D.C., “Atlanta is ours, and fairly won.” The capture of the heart of the south the day before was the end of a fiercely fought four-month campaign in the Western Theater of the Civil War and caused jubilation throughout the North. More importantly for the Union cause, it propelled President Abraham Lincoln to reelection two months later.

In this volume author James Donnell explores the entire Atlanta campaign, from Sherman’s initial clashes with Joseph E. Johnston’s army of Tennessee to the final Confederate resistance under General John Bell Hood. Perfectly complemented by specially commissioned artwork and detailed maps, this study takes the reader from the border of Georgia and Tennessee to Atlanta, with Sherman preparing for his famous March to the Sea.”