Scott L. Mingus Sr. is a retired scientist and executive in the global paper industry and holds patents in self-adhesive postage stamps and bar code labels. The Ohio native is a graduate of the paper science and engineering program at Miami University. He was part of the research team that developed the first commercially successful self-adhesive U.S. postage stamps.

The York, Pa., resident has written 23 Civil War books. His biography of Confederate General William “Extra Billy” Smith won the 2013 Nathan Bedford Forrest Southern History Award and was nominated for the Virginia Literary Award for Non-Fiction. He also wrote several articles for Gettysburg Magazine. Scott maintains a blog on the Civil War history of York County (www.yorkblog.com/cannonball), and is a local Civil War tour guide for the York County Heritage Trust. He received the 2013 Heritage Profile Award for his contributions to local Civil War history.

He also has written six scenario books on miniature wargaming and was elected to the hobby’s prestigious Legion of Honor in 2011. His great-great-grandfather was a 15-year-old drummer boy for the 51st Ohio Volunteer Infantry and other family members fought at Antietam and Gettysburg int he Army of the Potomac. 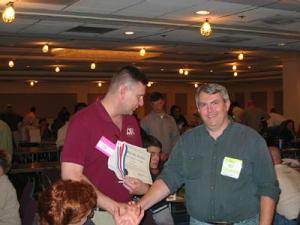 Curt Daniels, Scott Mingus, and HMGS-East official Mike Hillsgrove pose in front of Scott’s layout of the action at Fox’s Gap during the Battle of South Mountain. (Fall-In 2002 wargaming convention)

Scott has received several awards for his wargames over the years.