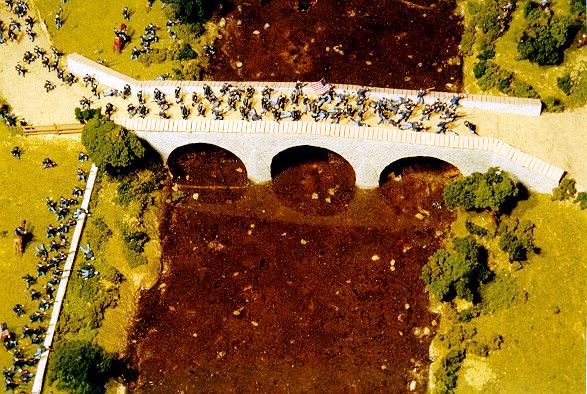 The 51st Pennsylvania and the 51st New York of the Union IX Corps crosses what later became Burnside’s Bridge at the Battle of Antietam on September 17, 1862. This rustic stone bridge over Antietam Creek is a popular subject for dioramas. This one is a 25mm rendition by artist Brian Sullivan.

University of Maryland graduate Brian Sullivan creates and sells custom dioramas of various Civil War battles. His website has photographs of several of his creations. Have a look! These look great on desks or on shelves. 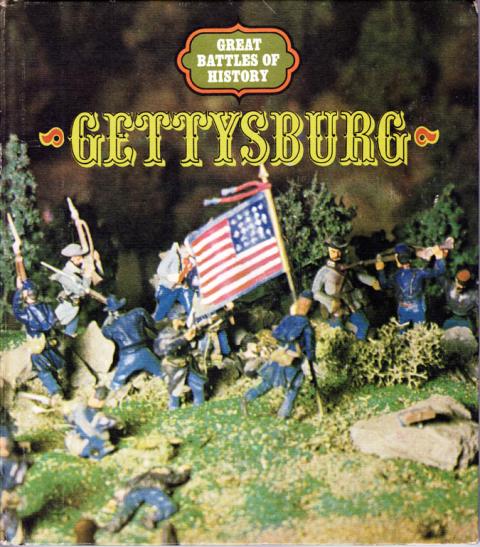 END_OF_DOCUMENT_TOKEN_TO_BE_REPLACED

The title, They Couldn’t Hit an Elephant, comes from a quotation attributed to Maj. Gen. John Sedgwick of the Union Army of the Potomac just prior to his death at the hands of distant Confederate sharpshooters during the Battle of Spotsylvania Court House in May 1864. Here is some information from the TFL website…

“Great news for those who are looking for a fresh approach to American Civil War gaming, our latest rule set is at the printers and will be published on Wednesday the 3rd of December. Designed for either Divisional or Corps level games these have been written to give an enjoyable game which is also historically accurate in the abilities of troops and commanders. With fifty-two pages of text on high quality paper the rules are presented in staple bound format with a heavy card gloss colour cover. As well as complete rules for the period TCHAE contains lists for armies throughout the period, with commanders, weapons and troop quality covered for all theatres, and three scenarios to get you started.

We are now taking advanced orders of both the pdf and hard copy version, both will be despatched on the day of publication. £12 for the hard copy rules, £7 for pdf to anywhere in the world.”

The once peacful little village of Pouppeville in 15mm — from the collection of Curt Daniels. Houses have lift-off roofs to allow troops in hide in the buildings. There are some nasty surprises awaiting the oncoming Americans, including a pesky sniper hidden in the upstairs of the building on the left center of the photograph. The actual village is near the mouth of the River Douve about 5 miles northeast of Carentan.

On June 6, 1944, Allied troops headed inland after landing on various beaches along the coast of Normandy in northern France. Several routes led from the beach, allowing an egress from the bottleneck at the beaches themselves. Among the exit points was the crossroads village of Pouppeville, where scattered elements of American paratroopers, including the 3rd Battalion of the 501st Regiment and members of the 101st Airborne “Screaming Eagles” attacked from behind German lines. Col. Julius J. Ewell (West Point, Class of 1939) was in command of the 3rd Battalion and the overall advance into Pouppeville. (During Viet Nam, Ewell  commanded forces in the Mekong Delta).

Curt Daniels, Billy Ray Wagenseller, and I played a 15mm game of this D-Day small unit action using the company-level WWII miniature rules, I Ain’t Been Shot, Mum, by TooFatLardies.

END_OF_DOCUMENT_TOKEN_TO_BE_REPLACED

Some more info on the old Dobbin House diorama at Gettysburg

A vintage photograph of the Gettysburg Battlefield Diorama in the old Dobbin House on Steinwehr Avenue in Gettysburg.

A Charge! reader sent me some interesting information on the Gettysburg Diorama that used to be located in the historic Dobbin House in Gettysburg, Pennsylvania. The diorama was constructed by a York, PA, man, Curvin Heiss and his son. Heiss hard carved the molds and then cast the figures. He and his son Curvin Jr. then hand painted the 54mm Civil War figures.

END_OF_DOCUMENT_TOKEN_TO_BE_REPLACED

Courtesy of Don Wiles, Carlisle’s Michael J, and the good folks at militaryhistoryonline.com, I present a few photographs of the old Civil War diorama that once graced the Dobbin House on the south side of Gettysburg, Pennsylvania. Pictured is a scene of Pickett’s Charge as Rebels slam into the Union II Corps line. Figures are 54mm from various makers.

The diorama was in its heyday during the 1960s when it was a relatively popular attraction. Curvin Heiss was the building’s owner during that time frame, and it housed a museum and gift shop. I remember riding by the Dobbin House during my first visit to Gettysburg in 1968, seeing the large banner hanging from the second story advertising the diorama, and wishing we had the time to stop and see it (we were on a tight schedule, but my Dad bought me a nice box of 54mm Britains “Eyes Right” ACW figures so I could play toy soldiers on the ride to Hershey).

END_OF_DOCUMENT_TOKEN_TO_BE_REPLACED 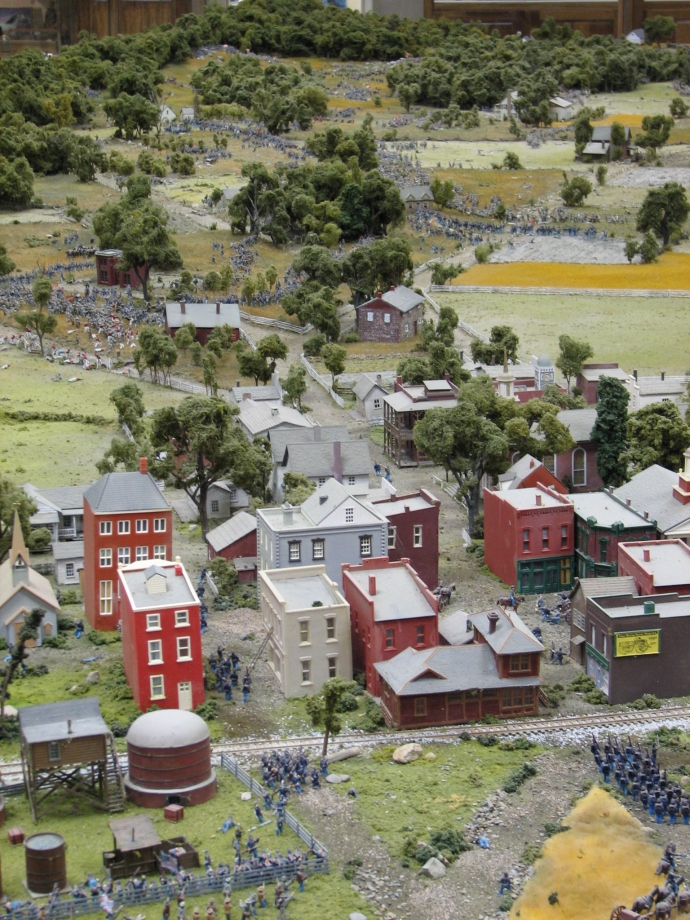 The prosperous rural town of Gettysburg, Pennsylvania, is surrounded by swirling fighting between the Blue and the Gray in this impressive photograph of the Artillery Ridge Campground’s Battle of Gettysburg diorama.

Many years ago, I read an article in Civil War Times Illustrated about a Civil War diorama that had been constructed by a western Michigan man using 20,000+ hand-painted HO scale plastic Civil War toy soldiers (Airfix, Revell, Itali, and several other brands). The huge diorama portrayed the entire Battle of Gettysburg in scale, and was then on display in a shopping mall near Kalamazoo, Michigan. The owner’s dream was to eventually sell the diorama to someone who would relocate it to a permanent place in or near Gettysburg. That dream later became reality when the massive diorama was shipped to Artillery Ridge Campground on Taneytown Road in Gettysburg, where has been available ever since for public view for a modest fee.

Terrain maker and gamer Randy Miller was kind enough to send me a link to several dozen photographs of this diorama that he snapped while visiting Gettysburg during the 145th Anniversary celebrations last July. Here are a few more photos, as well as a hotlink to his photo gallery.

END_OF_DOCUMENT_TOKEN_TO_BE_REPLACED 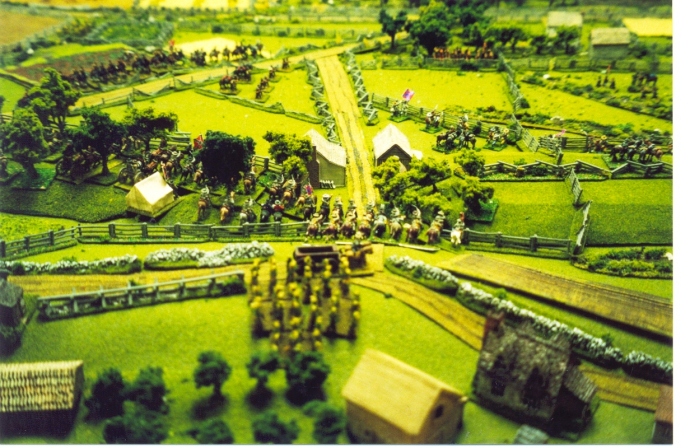 (Click to enlarge the photo for better viewing of the details)

Elements of Albert Jenkins’ brigade of Confederate mounted infantry from (west) Virginia form dismounted skirmish battle lines on Cress Ridge (right center) during the Battle of Gettysburg. In the foreground is Col. John R. Chambliss’s mounted brigade on Hoffman Ridge. Photo of a game presented at Historicon a few years ago by Scott L. Mingus, Sr.

In the center of the above photograph is the Rummel farm, which changed hands several times during the often savage encounter. To the upper left along the Stallsmith farm lane is the Virginia brigade of FitzHugh Lee, which will later launch a major mounted attack that will be met by a pair of Michigan regiments. At the right center, dismounted Federals of George Armstrong Custer’s 6th Michigan skirmish with Jenkins’ men, now commanded by Lt. Col. Vincent Witcher. In the distance (top right corner) is John McIntosh’s Union brigade, which includes the 3rd Pennsylvania Volunteer Cavalry.

END_OF_DOCUMENT_TOKEN_TO_BE_REPLACED 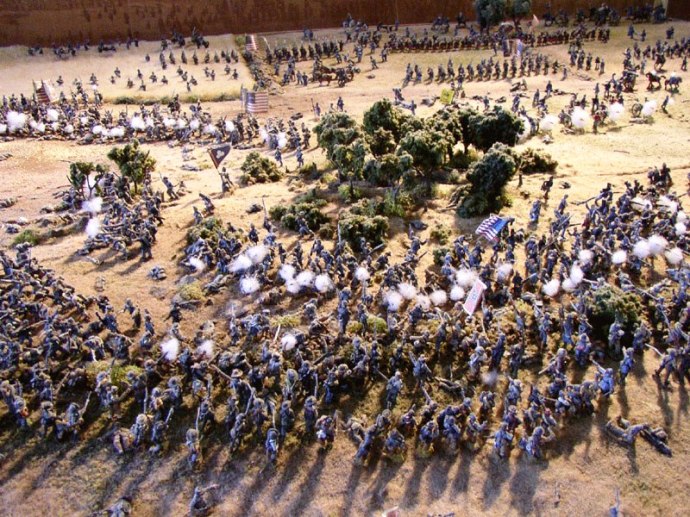 For the last couple of years that the old Cyclorama building was in use at the Gettysburg National Military Park in Gettysburg, Pennsylvania, the lobby was graced by a large and quite impressive Civil War diorama of Pickett’s Charge. Constructed and painted by a local hobbyist in Gettysburg, the collection is no longer on public display. However, Larry Reber of Gettysburg Soldiers took a few photos to memorialize this now defunct diorama. Here are some of Larry’s photos.

END_OF_DOCUMENT_TOKEN_TO_BE_REPLACED

A model passenger train sits at the Gettysburg Depot in this photograph by Larry Reber from GettysburgSoldiers.com of the Union Drummer Boy’s HO scale diorama of the town of Gettysburg on June 30, 1863. The actual last train from Gettysburg that afternoon carried several government officials to safety, as well as those citizens who wished to leave the area to avoid having to stay in their homes during the impending combat. Many of Gettysburg’s residents had already fled, although more than a thousand are estimated to have been present during the Battle of Gettysburg on July 1-4.

As mentioned in the previous post, this classic diorama dates from the early 1960s from the Charley Weaver Museum and is still be best 3D rendition of Gettysburg as it may have looked during the Civil War. However, the diorama is rife with factual errors, including the above scene. The train station was not painted a reddish color; see my previous post on the model diorama of the 1863 Gettysburg train station. The model uses a stock locomotive; it is not of the same make and model as what the actual railroad used in 1863, and it is painted in the livery of the Baltimore & Ohio RR instead of the Gettysburg Railroad. Still, for all of its faults, the diorama is well worth a look the next time you are in Gettysburg. Stop by the Union Drummer Boy on Baltimore Street.