I have long been fascinated by cavalry operations during the American Civil War, despite the fact that all of my ACW ancestors slugged along in the Union infantry.  Among the important raids that are now long forgotten by the general public was Stoneman’s Raid in the spring of 1865. As part of the Army of the Potomac, Gen. George Stoneman had led a major raid in 1863 and smaller ones off and on throughout the rest of the war. In 1865, he led his troops through Virginia and North Carolina collecting supplies, harassing Confederate outposts, destroying communications lines, and severing supply routes.  His actions were part of a coordinated effort among several leading Federal generals that essentially ended the war in the Eastern Theater.

North Carolina author Chris J. Hartley is a professional marketer and communications expert with experience in several large companies in various industries. He has put his talents to good use in his Civil War books, including his most recent fine effort, Stoneman’s Raid 1865.  Available from amazon.com and other leading retailers, this new book is sure to become the definitive book on the operation.

Hartley’s website touts ” In the spring of 1865, Federal Maj. Gen. George Stoneman launched a cavalry raid deep into the heart of the Confederacy. For two long months, Stoneman’s cavalry rode across six southern states, fighting fierce skirmishes and destroying massive amounts of supplies and facilities. The raid brought the Civil War home to dozens of communities that had not seen it up close before, and went on to become one of the longest cavalry raids in U.S. military history.”

Indeed Chris has succeeded in bringing Stoneman’s Raid to the modern audience that “has not seen it up close before.” 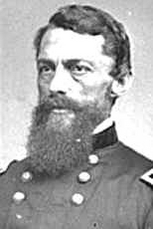 “The raid probably directly involved more noncombatants in a military action than any other single event of its scale during the war,” writes Hartley in his introduction. Tens of thousands of men, both Union and Confederate, played a role in the lengthy operation, which inspired the 1969 hit song, “The Night They Drove Old Dixie Down.” Southern forces scrambled to intercept Stoneman and halt his progress, to no avail.

Hartley’s coverage of the raid is intense and well researched, using scores of original sources that have rarely or never before appeared in print, both from the Union perspective and that of the Rebels who opposed Stoneman.  The author makes extensive use of first person accounts and quotations from the common soldiers on both sides, and these are effective in communicating the emotions that the soldiers were experiencing as the raid progressed. Sprinkled with photographs, illustrations, and occasional maps, this book relies on crisp verbiage, strong narrative, and excellent research to convey the sense of the raid and the fear it brought to rural Virginians and North Carolinians.

The new book can be purchased at major bookstores everywhere. It is also available online at blairpub.com, amazon.com, and indiebound.com. It can also be purchased DIRECT from the author, Chris Hartley. You will receive a signed copy PLUS a free BONUS chapter! Just email chartley@stonemansraid.com for more info.