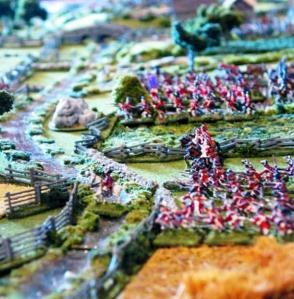 A half-mile away, Continental reinforcements deploy to bolster the defensive line. It’s a strong position, our riflemen protect our flanks, and the British don’t have the stomach for our lead. “We will prevail! Give me Liberty, or give me death!,” comes the cry from our ranks. All eyes train across the fields in the morning light, as the enemy is massing. This day will be desperate, but victorious, we believe. With George Washington present, we cannot go wrong.

We British disdain this rebellious rabble in blue that await the taste of our bayonets. “It should not take long to dispatch these disloyal “soldiers” who have betrayed their king and country,” sarcastically remarks a veteran captain.

Awaiting the British advance – our nerves are on edge, but our powder is dry and the targets inviting with their precise packed ranks and their bright red coats. “We will send them back across the ocean to old King George!” comes the cry from the major.

“Forward!” rings the commands from the general, and the long line of British slowly advances in the morning mist toward the awaiting Continentals. “Fire!” comes the cry from the American artillery commander. The battle is joined.

One thought on “Some more photographs of my 15mm AWI gaming”