New book: The History Buff’s Guide to the Civil War 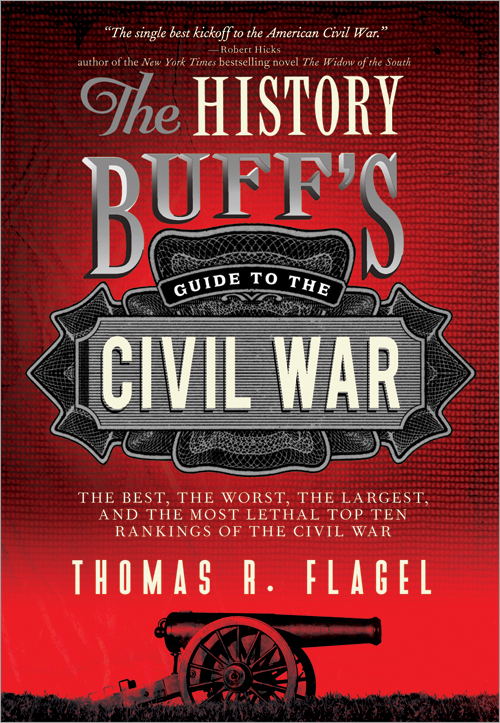 Comedian and talk show host David Letterman popularized the concept of “Top Ten Lists,” an often humorous and satiric look at current events or newsworthy people. Veteran author and Iowa educator Thomas R. Flagel used a similar concept (without the humor or satire, of course!) to present an overview of the American Civil War in his new book, The History Buff’s Guide to the Civil War (2010, Cumberland House). It is now available from amazon.com and other leading book retailers.

He breaks the war down into six major chunks — Antebellum, Politics, Military Life, The Home Front, In Retrospect, and Pursuing the War. Each chapter is then subdivided in a series of Top Ten lists based upon the author’s personal rankings; for example Chapter 1, Antebellum contains the sections “Top Ten Causes of the Civil War,” “Top Ten States with the Highest Percentage of Slaves,” Top Ten Events of Slave Life,” “Top Ten Abolitionists,” and “Top Ten Fire-Eaters.”  Each list is annotated and Flagel’s commentary on each section gives an overview of the topic. The footnotes are extensive and useful to the history buff who wishes to dive much deeper into the particular subject.

At first glance, this may appear to merely be another casual recounting of an author’s rankings for his own pet subjects of the Civil War. But, the book is much deeper and richer than that. Flagel, a history teacher by profession, had framed his overview in layers, so that the most casual buff might get a cursory summary of key Civil War events, people, and places, while more seasoned readers can find useful references and observations that should spark a deeper dive into a particular subject.

Some of the lists are highly subjective, but interesting to debate among friends over dinner after an afternoon of tramping Civil War battlefields or historical sites. For example, Flagel presents his ranking and explanation for the “Top Ten Bet Commanding Generals,” and perhaps even more fun to discuss, the “Top Ten Worst Commanding Generals.” There are so many worthy (or unworthy!) candidates for each list that the author could have selected.

The book is entertaining and easy to read. The layout and organization allows the reader to peruse the book in sections or bite-sized pieces, so that it can be enjoyed over a long period of time and does not require consecutive reading. A reader can skip around and skim topics of particular personal interest.

The 150th anniversary of the American Civil War is just months away, and the conflict’s very language still resonates within our national narrative. Texas rumbles with the sounds of secession.  “States’ rights” remains a battle cry over boarder security, civil unions, and taxation. Groundswells against federalism have given birth to a political faction.  The country still struggles with issues concerning race.

Author and historian Thomas R. Flagel offers a new and provocative perspective on the very source of these crises, through his newest edition of The History Buff’s Guide to the Civil War.

An era often referenced but rarely comprehended, the four-year maelstrom induced a trauma unprecedented and unsurpassed in the American experience. The modern nation North and South may still be contending with anger and denial, unable to graduate towards acceptance. Considering the evidence, often overlooked by other histories, our lingering divisions are understandable.

The History Buff’s Guide to the Civil War